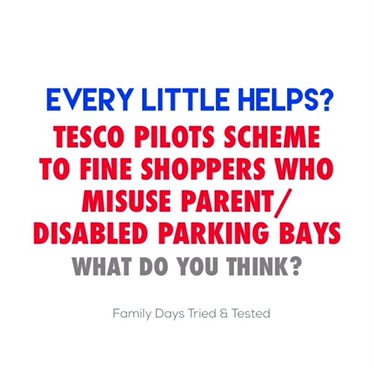 It’s a scheme that has been piloted in 81 stores and in the following weeks is set to be rolled out throughout a further 200 stores nationwide.

But is it welcomed and will it work?

Staff at selected stores are being given smartphones containing apps to capture evidence of offending car park users who do not abide by the rules.

Staff can then take pictures of cars parked in the bays which are designated for people with Blue Badges or children under the age of 12.

Evidence collected gets sent to a company, Horizon Parking, which gathers the drivers’ details from the DVLA and issues a £40 fine, which goes up to £70 if it is not paid within 14 days.

TESCO will not profit from these fines whatsoever*

But will it act as a deterrent?

I guess only time will tell…

You Deserve To Be Loved