You are here: Home / Mummy Musings / Should We Reward The Rebellious? 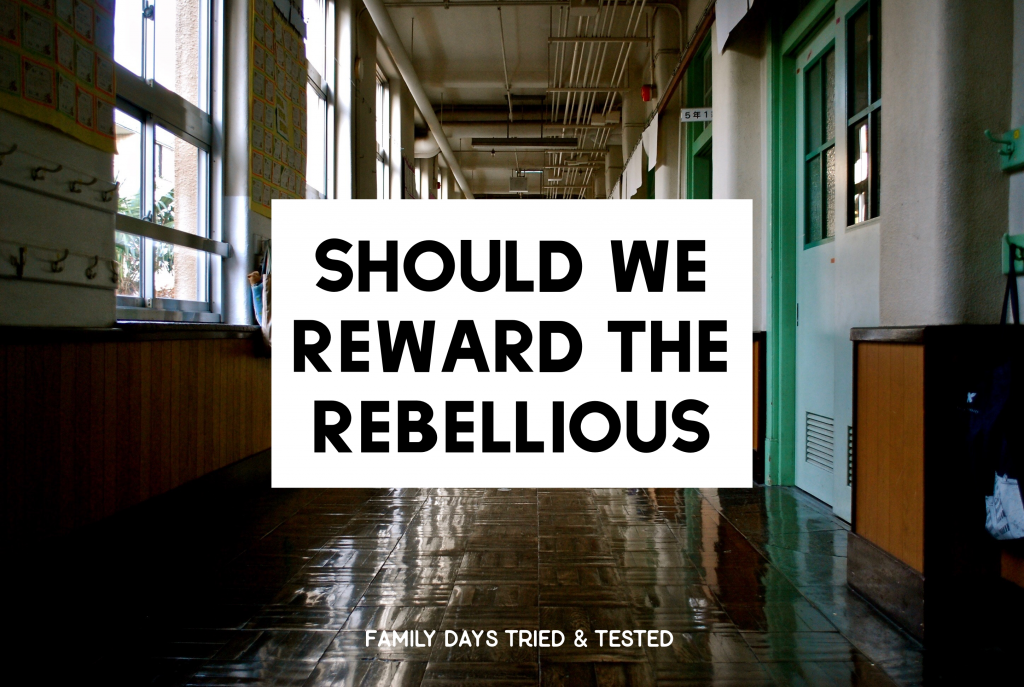 Here’s why the school system has evidently gone absolutely bonkers in my opinion.
Today the 14 year old is going on a ‘treat trip’ to a high wires adventure centre in the forest, organised and funded by the school. It’s a team building exercise with fellow pupils in the same boat in regards to repeated behaviour at school and a failure to tow the line.

The 14 year old that has been grounded for the past 4 weeks with no phone or PlayStation due to his behaviour. This is the 14 year old that cannot always be respectful at school, has bunked off, disrupts the class on occasion and fails to tow the authoritative line.

The 14 year old that thinks he’s a law unto himself.

Tomorrow he’s also being ‘rewarded’ with a trip to a rock climbing centre. (Although I use the word ‘rewarded’ in a loose and warped kind of way.)

That’s one hell of a reward sticker for all the wrong reasons and way beyond the realms of a sticker chart to encourage good behaviour. This is ludicrous downright unfair.

Meanwhile, his 13 year old sister is going to school, on time, with a highly respectful and well-mannered attitude and a non-disruptive presence. She’ll listen to the teachers, apply herself in everything she does and excel in her work consistently. She’ll pull in A grades like she always has done and take it in her stride that this is what is expected from her as a student.

She came home at the weekend with a letter for a school treat trip with an expense of £30. Not an obligatory or educational trip. A ‘treat trip’ which is optional.

We’ve budgeted and pulled our belts in so that she can go. She’s earned it, although some of her friends with the same attitude towards school, respect for authority and academic ability will not go because they cannot afford it.

That’s not a gold sticker in my book. It’s bizarre, and a bloody unfair system. I just can’t get my head around it.

I’m all for trying to work on children’s behaviour by encouraging them by focusing on the positives when they’re 7, but what the hell is this teaching them at 14?

Morally, what does it say? In my opinion, it screams at them that if you misbehave you’ll be rewarded. That’s not an encouragement, it’s an incentive.

Surely it says to them that they don’t have to bust their balls as they’ll reap rewards by being lacklustre. That hard work isn’t required. That applying yourself isn’t necessarily valued.

What does this say to the ones that do work hard?

If I was a student putting in my best I’d resent the fact that the rebels were rewarded for rebellion whilst my daily composure and effort was just taken as the norm. Wouldn’t you?

This is all arranged by the school. If we do not let him go, as parents, then we’re going against measures that they are put in place to try to help him with his behaviour and team skills. It’s utter madness and a rock and a hard place. We could go against the school and deny consent but then we’d be deemed as not being willing to approach his behaviour with the use of what they see as a constructive measure in attempting to get him to tow the line within his academic social surroundings.

It will help give him the key skills to take with him on his path into adulthood. Okay, I get that. But in a society where we are expected to work hard and constantly told from a young age that working hard reaps rewards, I feel that it’s a kick in the teeth for those who naturally do.

Who the hell sat there and thought, ‘You can’t behave in class. You’re disturbing other people’s education in class. I know, let’s send you out on a lovely jolly’.

I’d love to hear your thoughts as the perspective I have just seems to be one of feelings of ludicrousness and unfairness.

Have We Lost Control of Our Kids?

A Peacock In The Garden