You are here: Home / Holly House / Removal Of The Pews 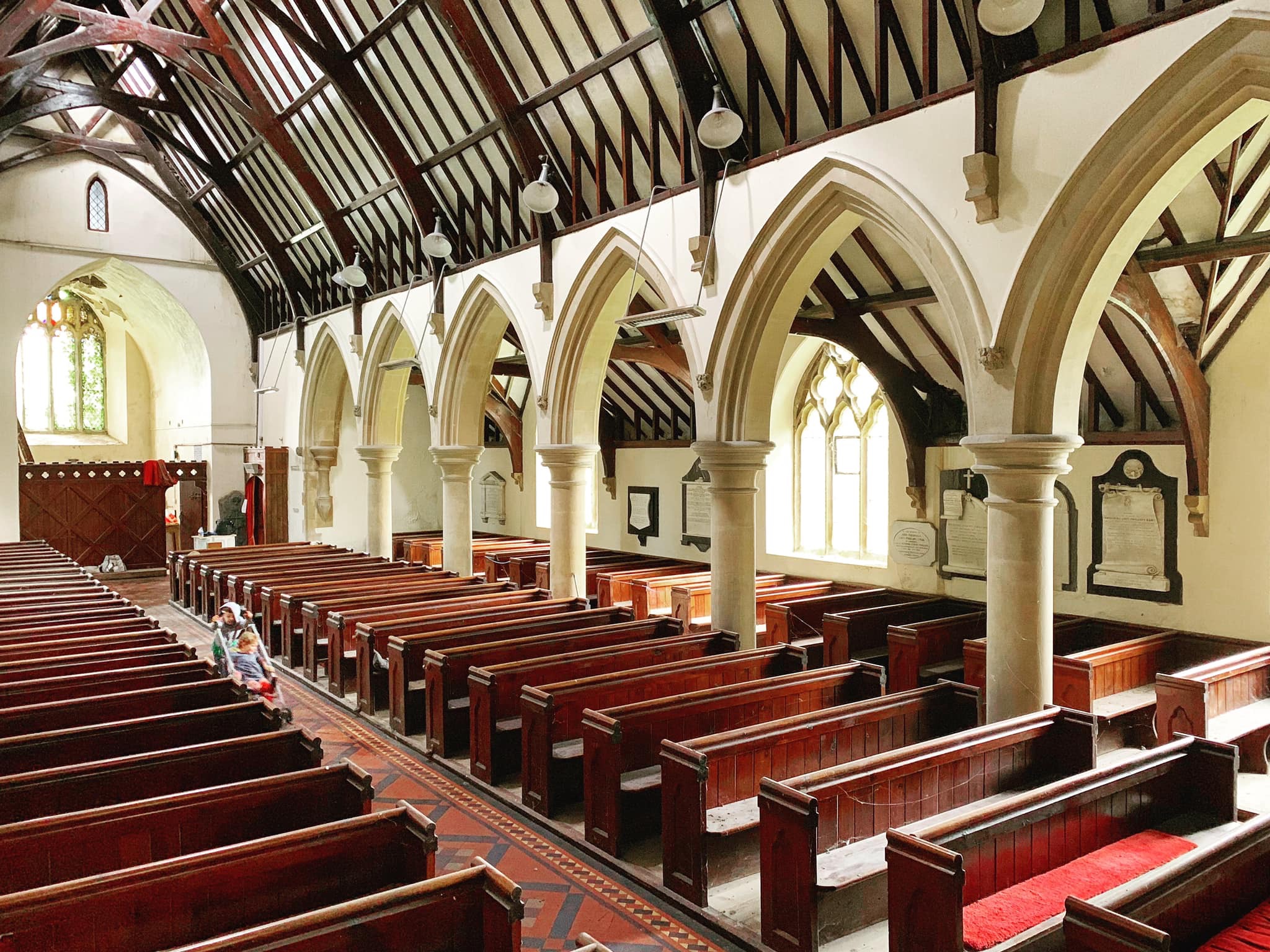 The time to remove the pews finally arrived in Holly House and it marked a very significant moment in the process of making space to enable us to build our living pod within the main body of the church. But it was a very lengthily process. After obtaining historical surveys for the church and its contents, it was deemed that the pews were a relatively modern-day addition to the church and of a mass-produced standard. A far cry in comparison to some of the medieval factors within the building. 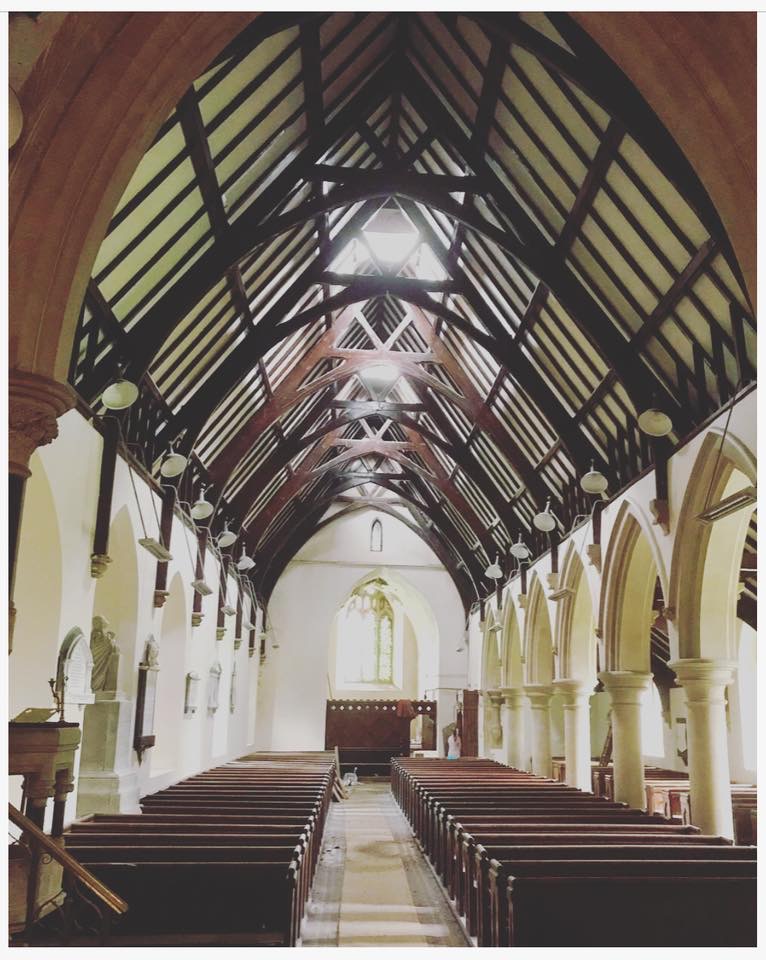 The first stage of the process was to ask the church if they would like to claim back the pews from us. This was done as a part of our sale paperwork to save us some time as liaising with the church body proved to be a very time-consuming relationship at all stages. As a part of the sale agreement, it was stipulated that should we want to get rid of any fixtures or fittings within the church we were to give them ‘first dibs’ on any unwanted items. The church did not want the pews so we were free to do with them as we wished.

The second stage was to submit a planning application to the council asking for permission to remove the pews along with an explanation of our intentions of use. This was eventually granted and photos of the pews in situ were submitted for historical records. Predominantly, our hope is to repurpose as many of the pews as possible. We’d like to make a front door, tabletops, seating areas, seating for the churchyard, a friendship bench for the children’s school, etc.

Having accounted for around 80% of the pews to be repurposed it left us with some to sell on. It was very important to us that the remaining pews would go to homes of people who had a sentimental tie to the church through marriage, christenings, worship, etc. This was pleasingly achieved through an advertisement of sale within the area local to the church. 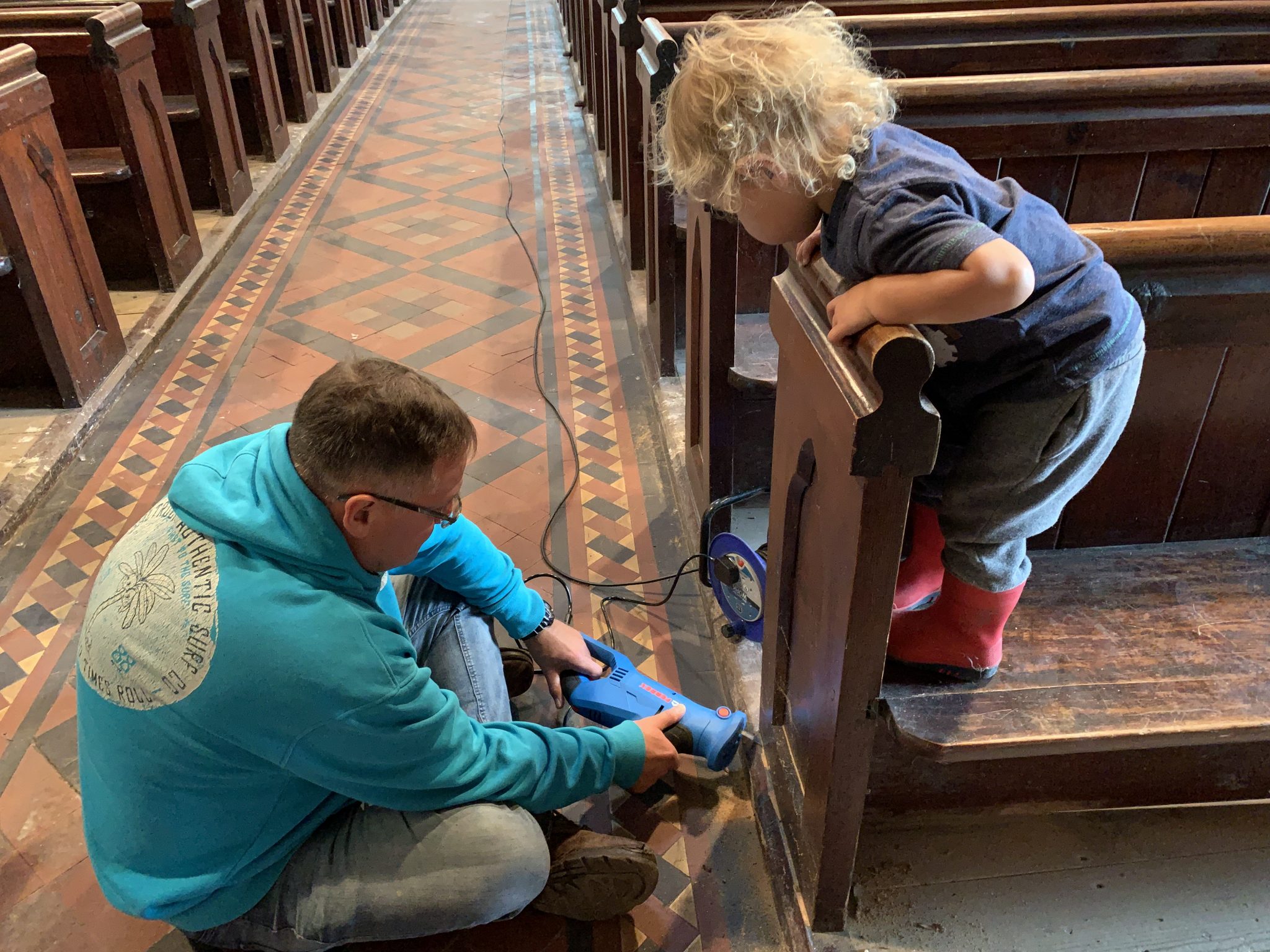 We were a little naive to think that removing the pews would be easy because it most certainly wasn’t. Those things were made to last. The method used to put them in place was one where the wood was cut to fit into slots and then the wood naturally expanded to fix it solidly in place. We tried using a saw to cut the wood that slotted into the base but this proved extremely difficult and actually broke a few of our saws in the process. The pews were sat on a wooden base which covered the expanse of the floor and below the base was a void in the floor around 3 or 4 foot deep. This would have acted as an aeration system for the pews. The smell of sap as we cut the wood was immense. 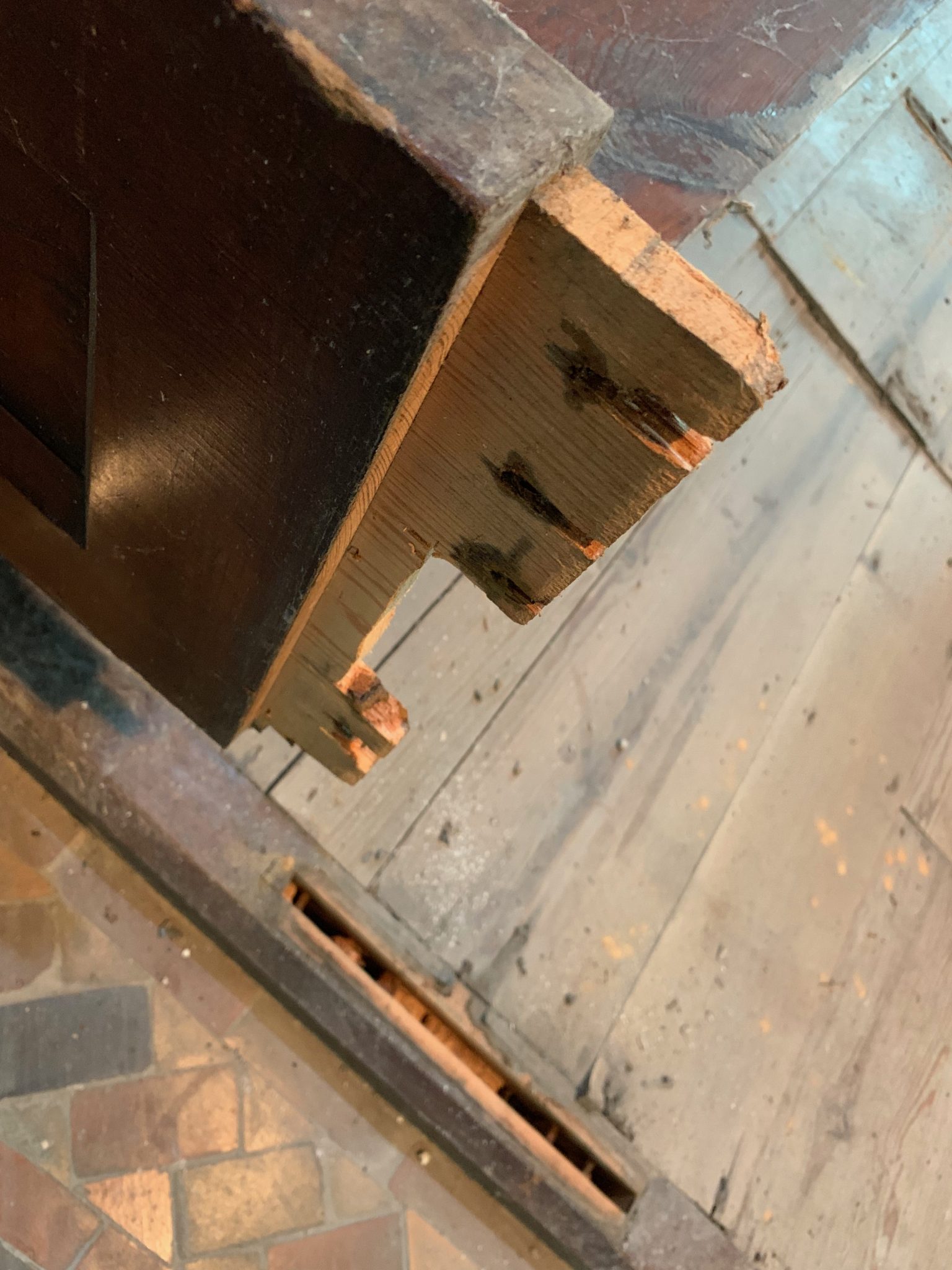 Each pew was then reinforced with nails without heads which were impossible to remove. After some trial and error, it was established that pure brute force was the way forward in removing them. 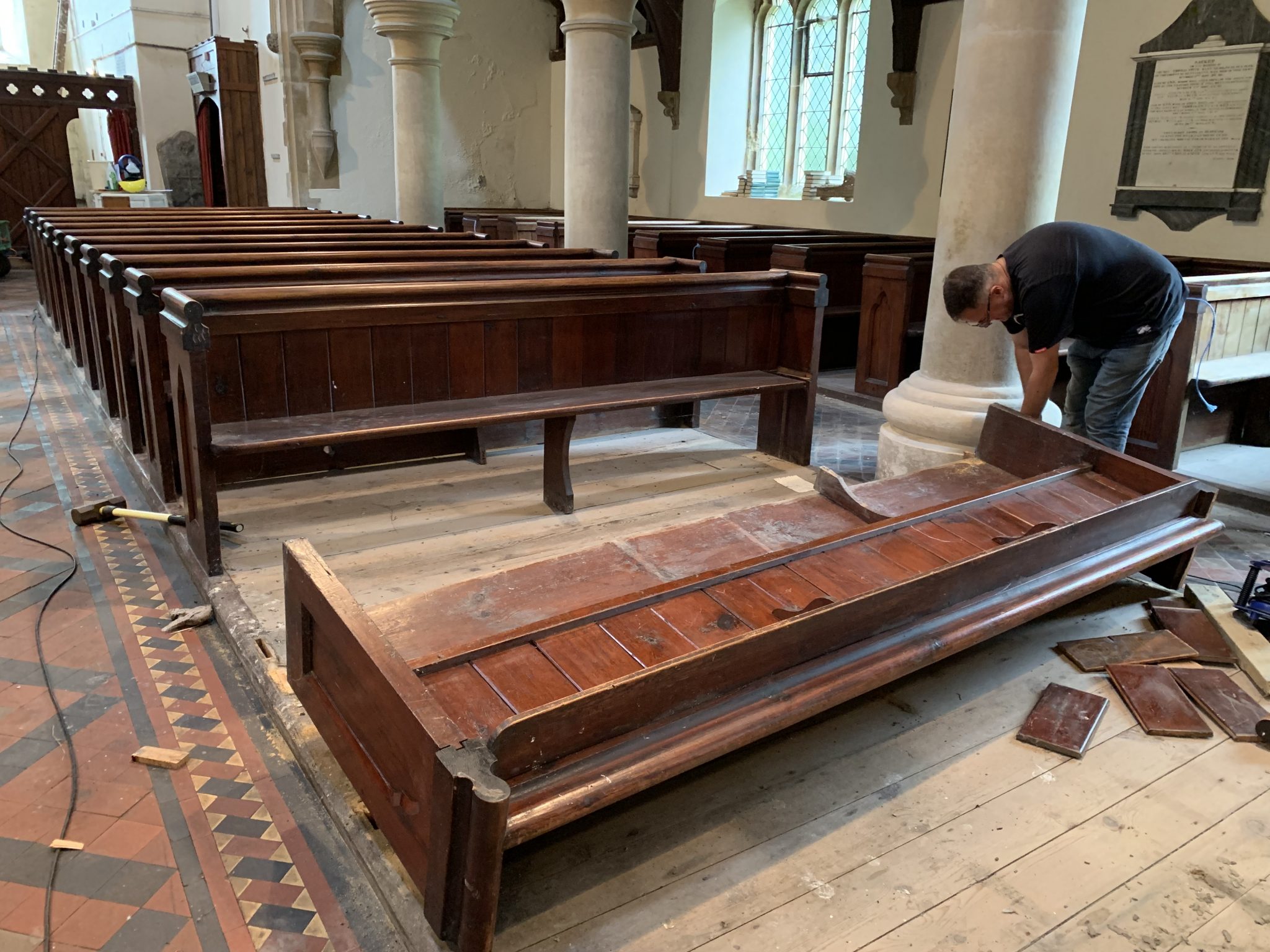 We were able to remove the centre aisle pews without any damage and the units remained whole. The pews that sat on the outskirts of the church were not whole and only had one end as the other end was attached to a wall base plate/panelling. We hoped to use a pew end from either side of two pews to put together to form one but unfortunately, this could not be achieved as they were different sizes. As the pews were removed from the outskirts they fell apart but they were kept to be repurposed so it’s all was good. 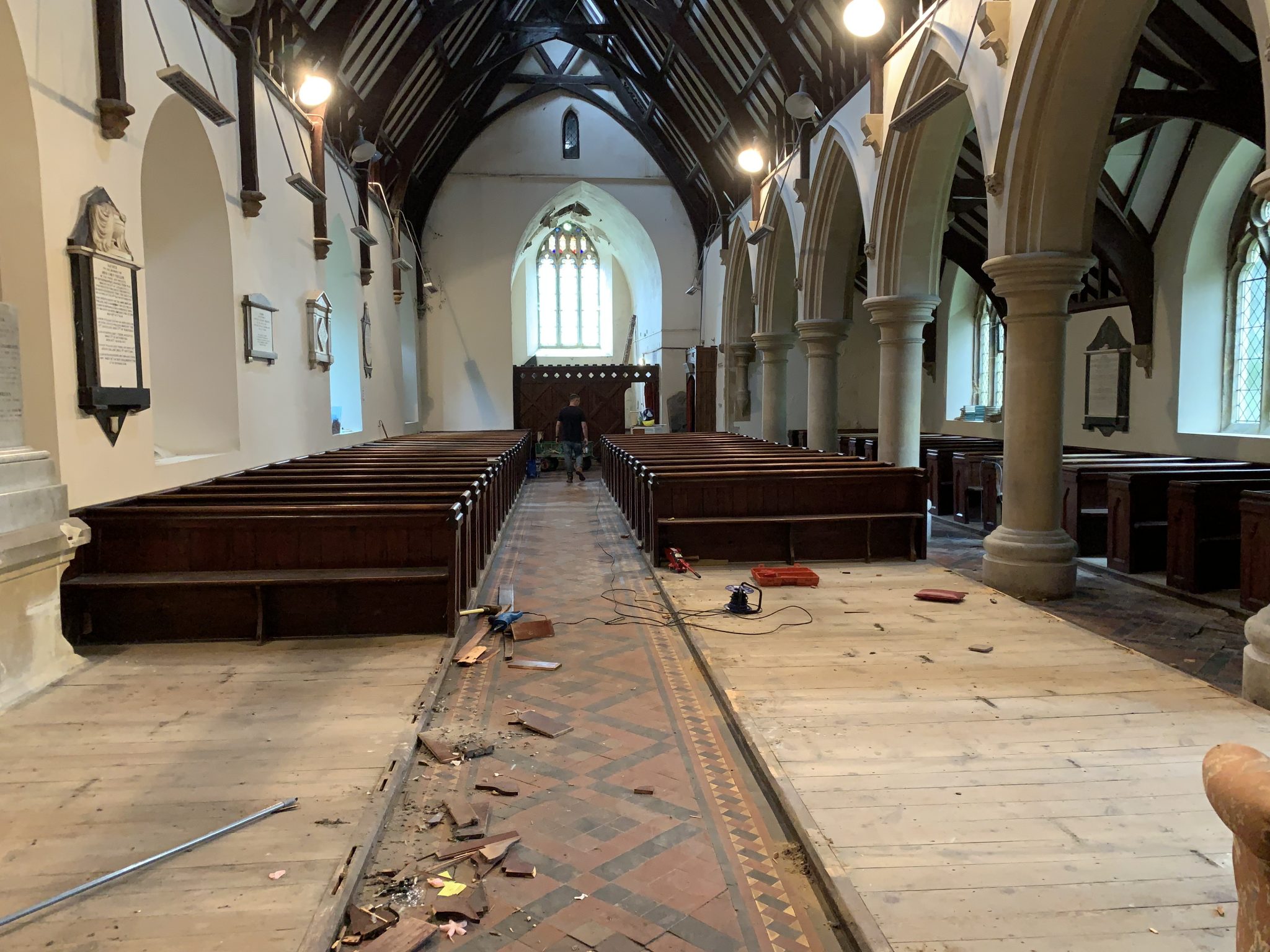 Our intention is to keep the wooden flooring which the pews sat on and preserve it to act as indoor decking which will protrude from beneath the living pod. 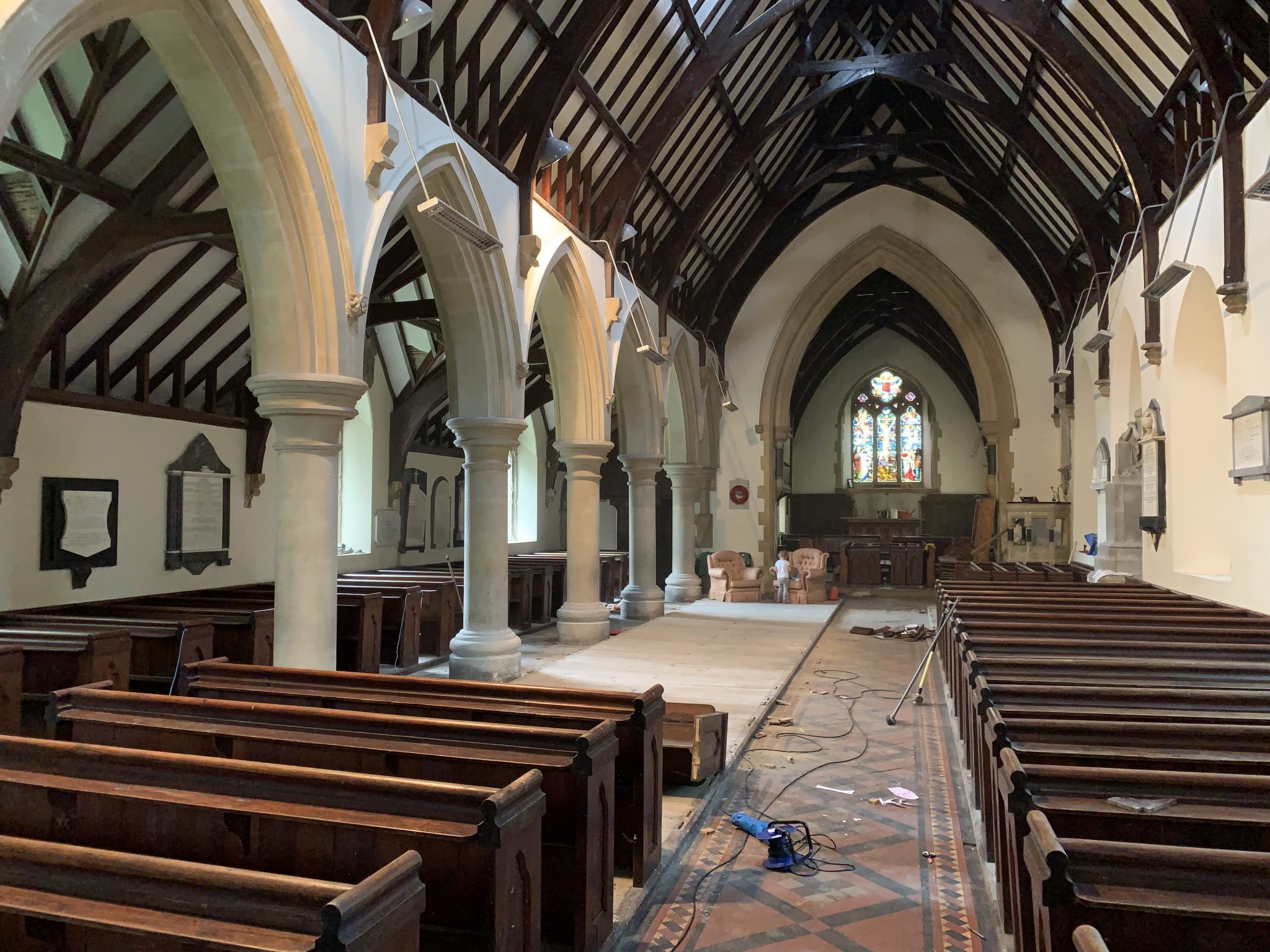 Below is a photo of underneath the flooring which the pews sat on and the void beneath it. 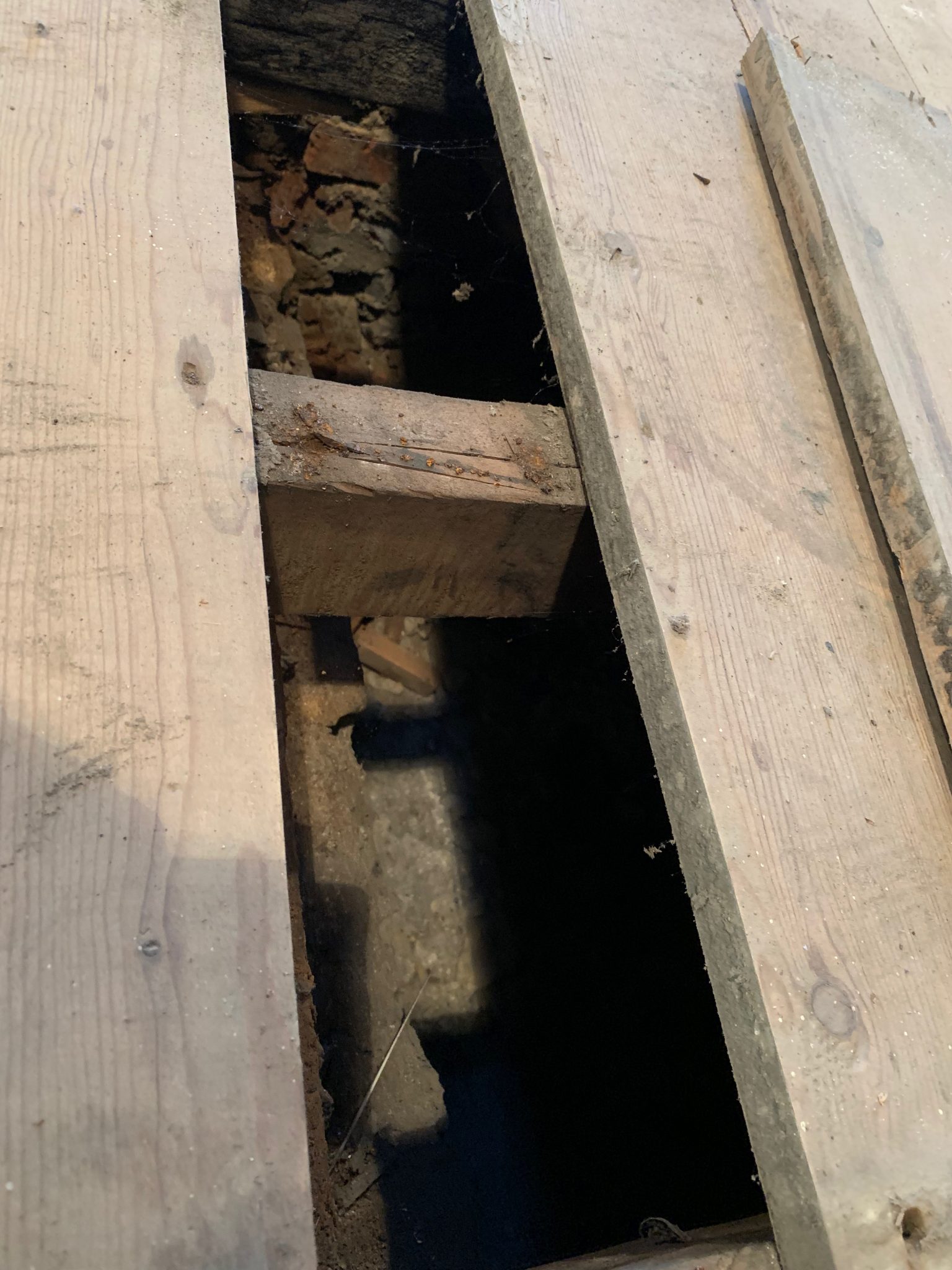 We did find some small treasures underneath the pews… 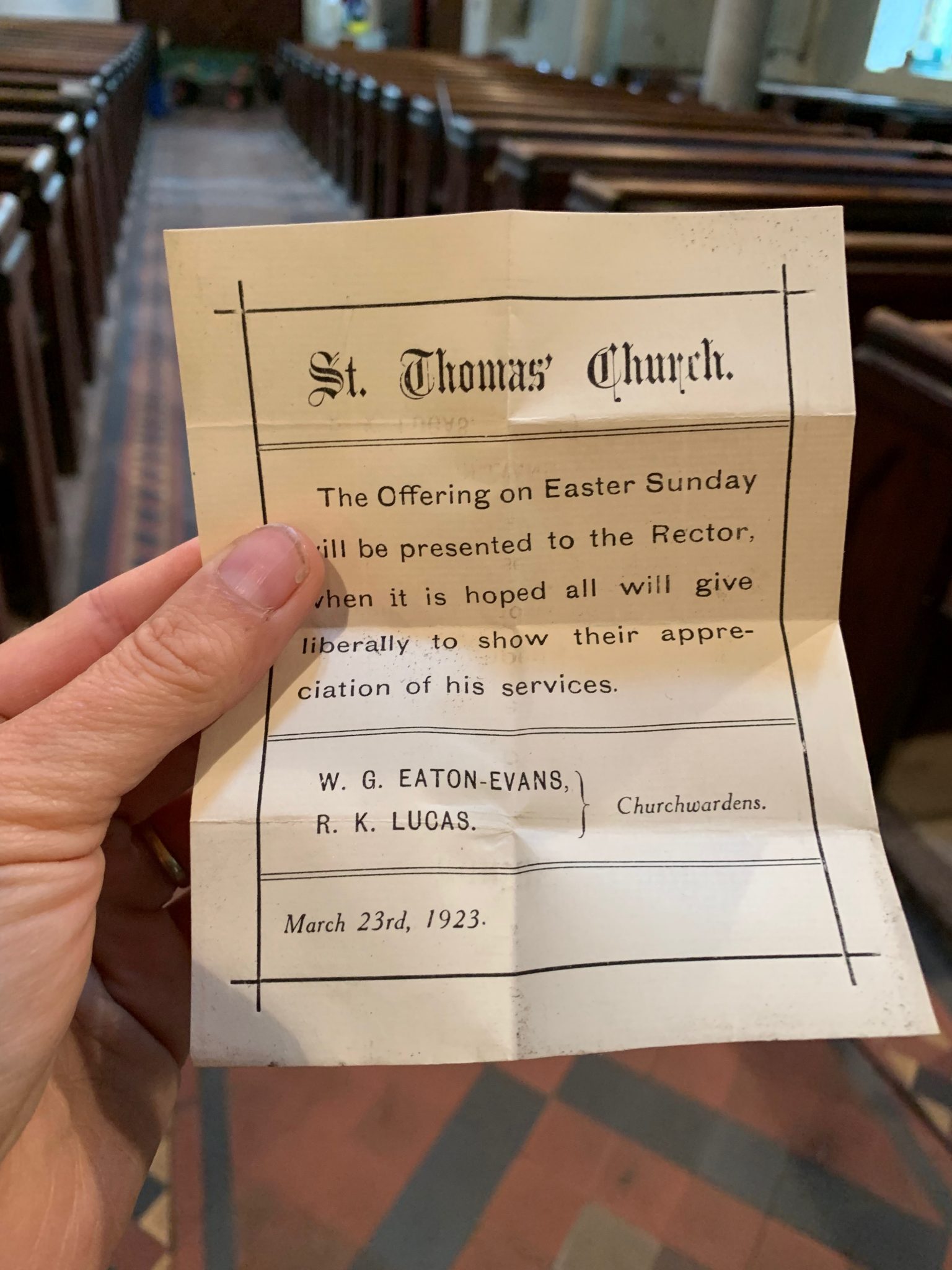 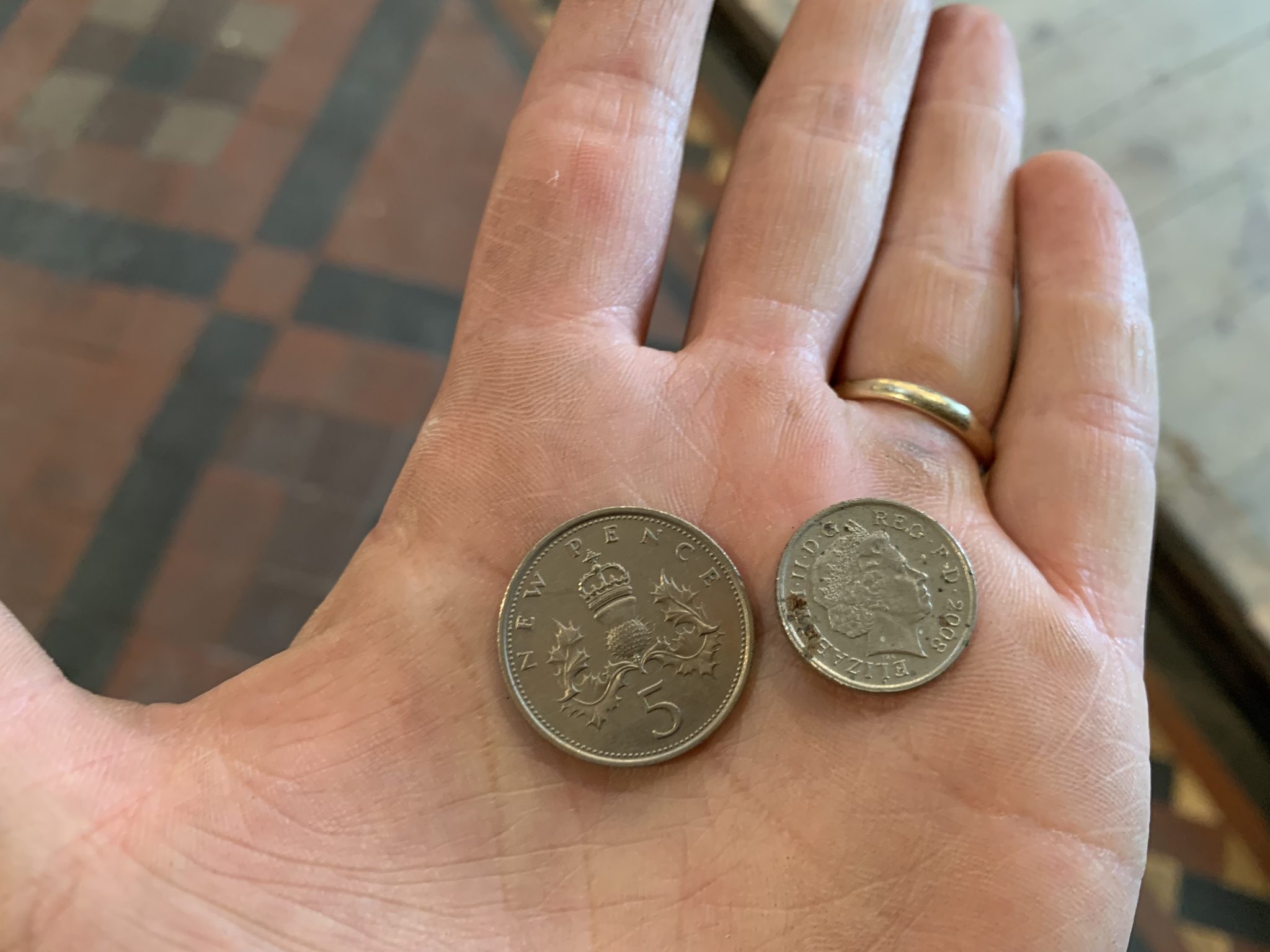 As usual, it was all hands on deck in helping out. 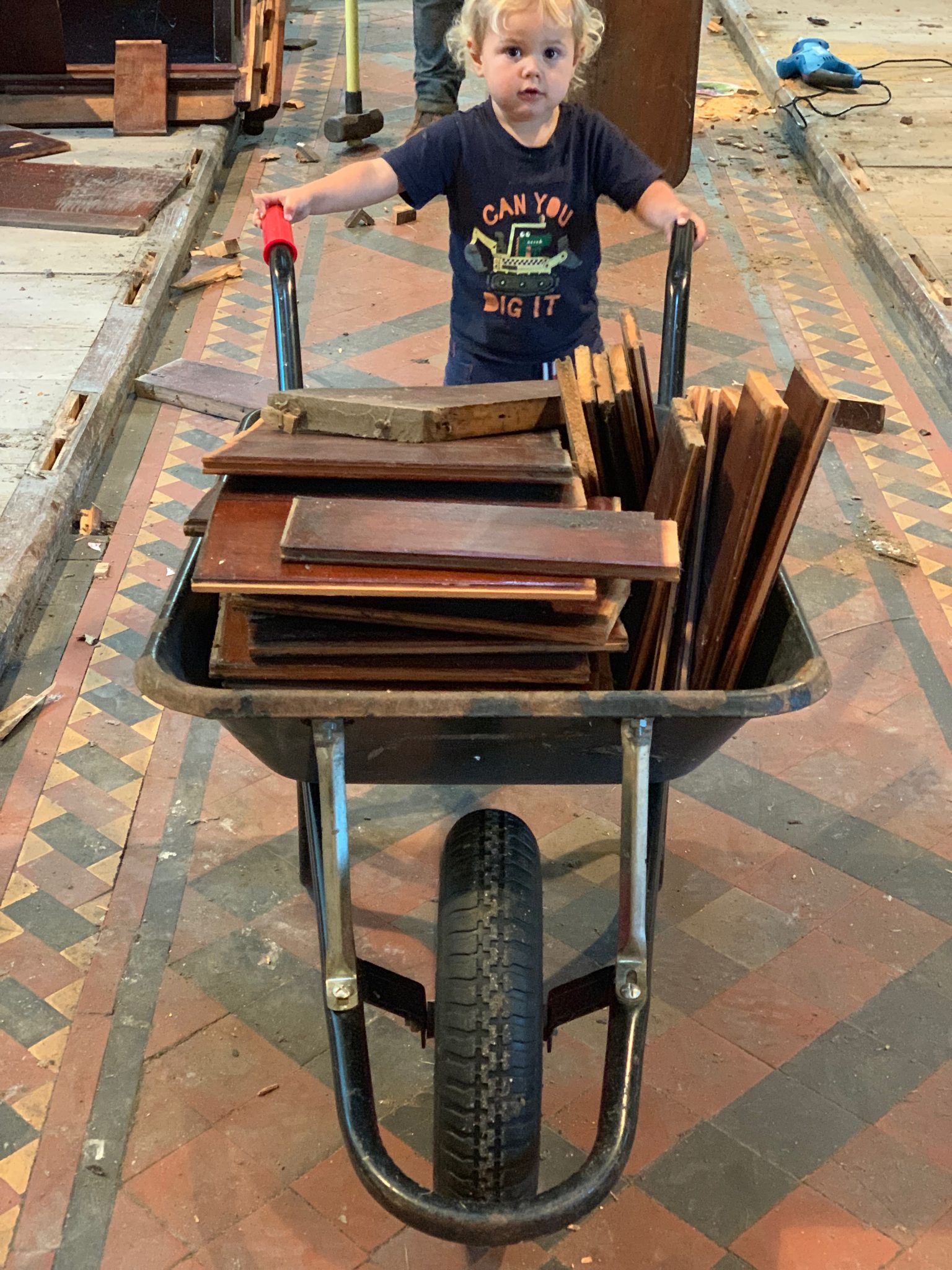 The space really started to open up as the pews were removed and the removal of the dark pews seemed to really allow light to flood back into the building. 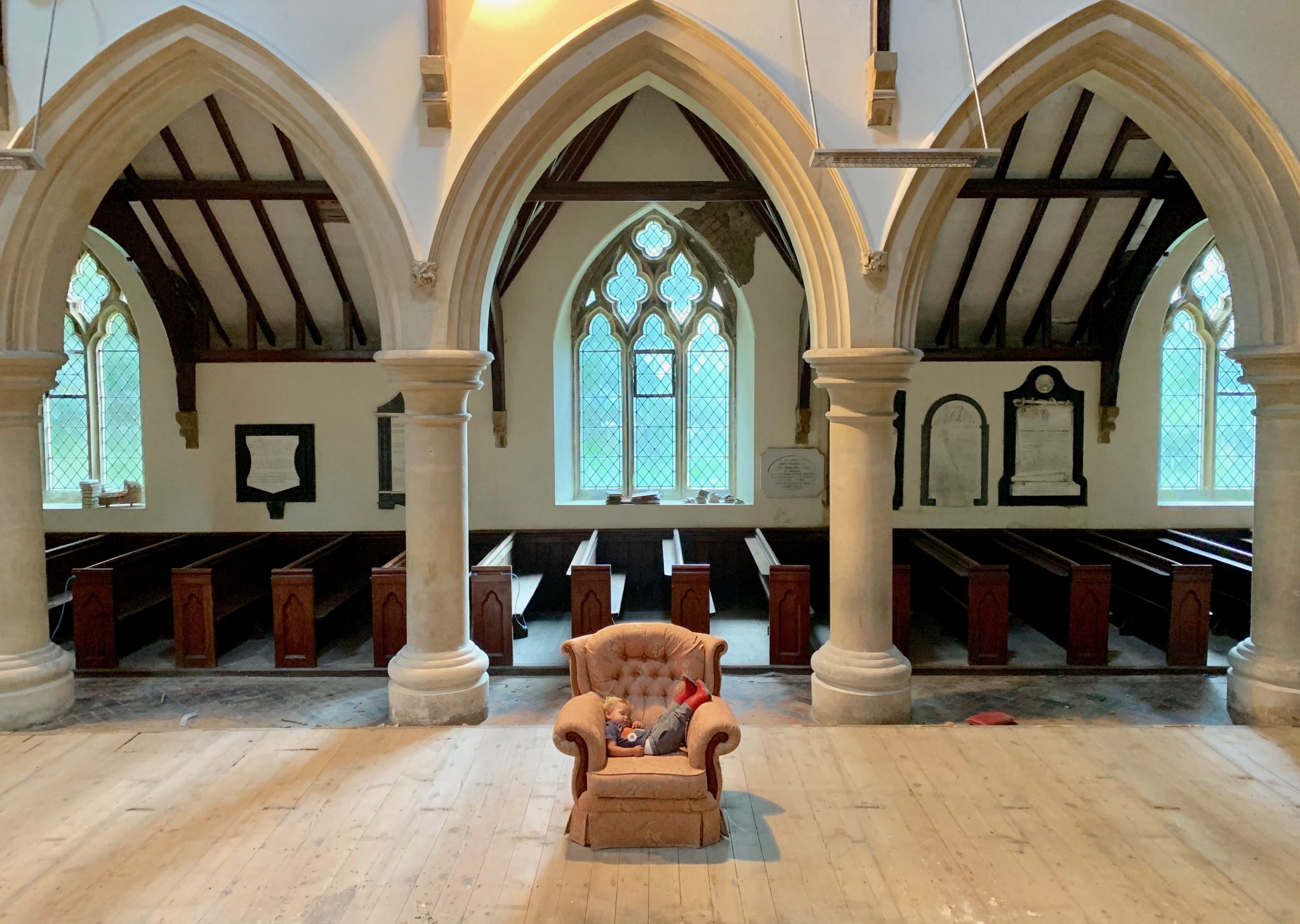 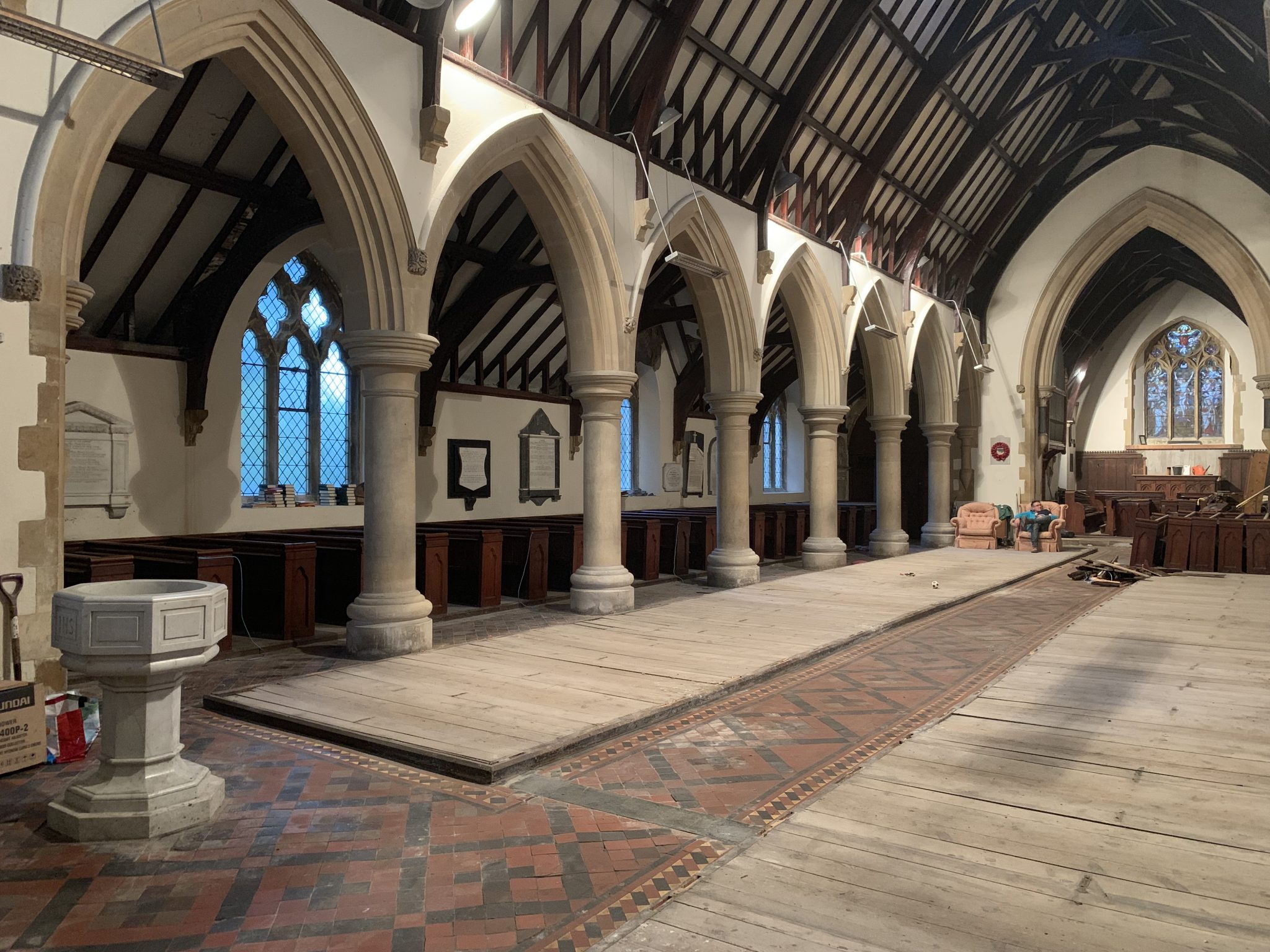 The panelling along the wall will also be removed and repurposed, and the bare stone walls behind it will be lime plastered and painted up to match the existing walls. 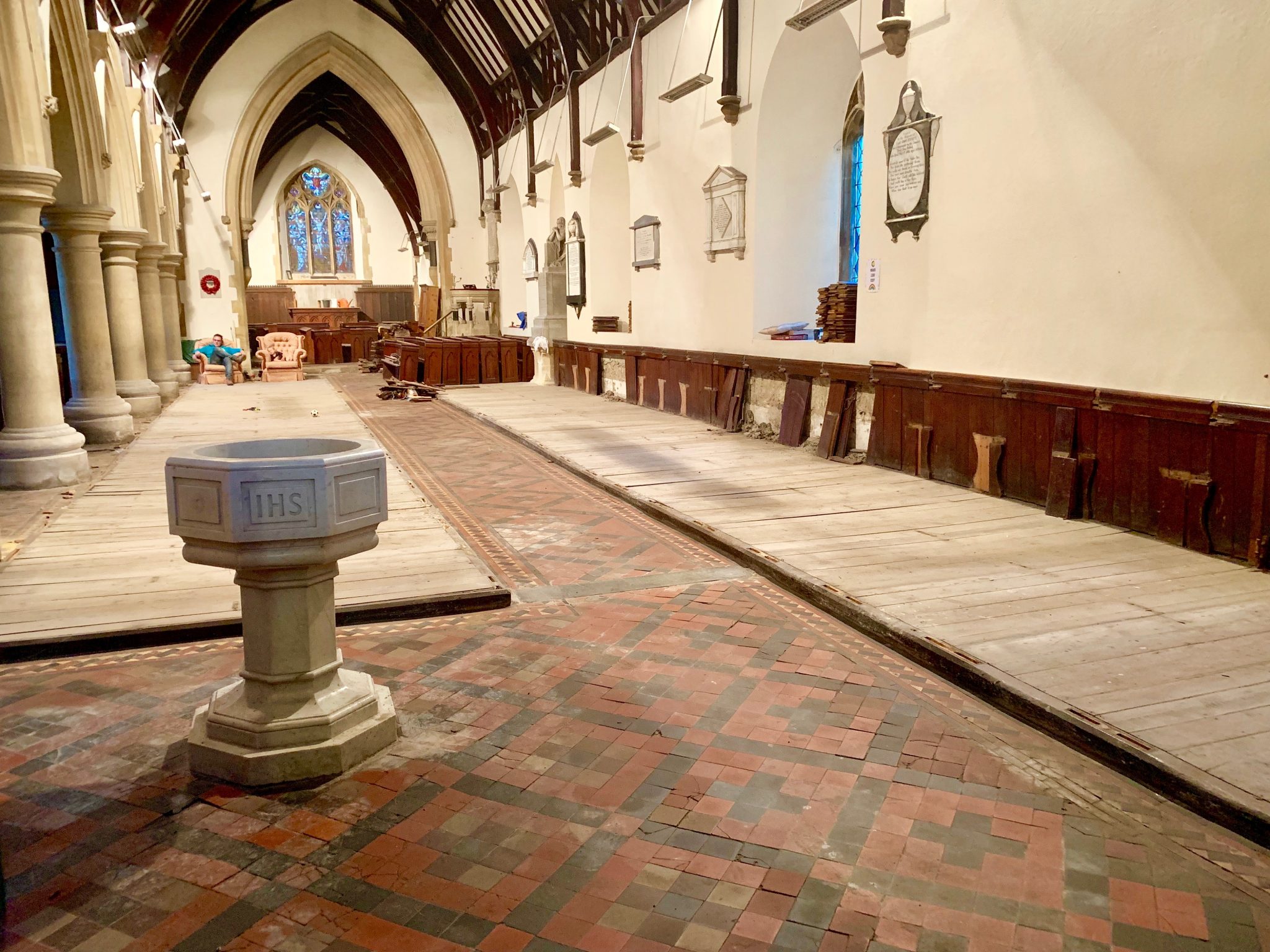 It was a process of real mixed emotions. Whereas it felt quite sad to be removing the pews it also felt like the building was transforming and blooming. We repurposed our first piece of a pew, along with the rope from one of the bells, and made a swing with the children. 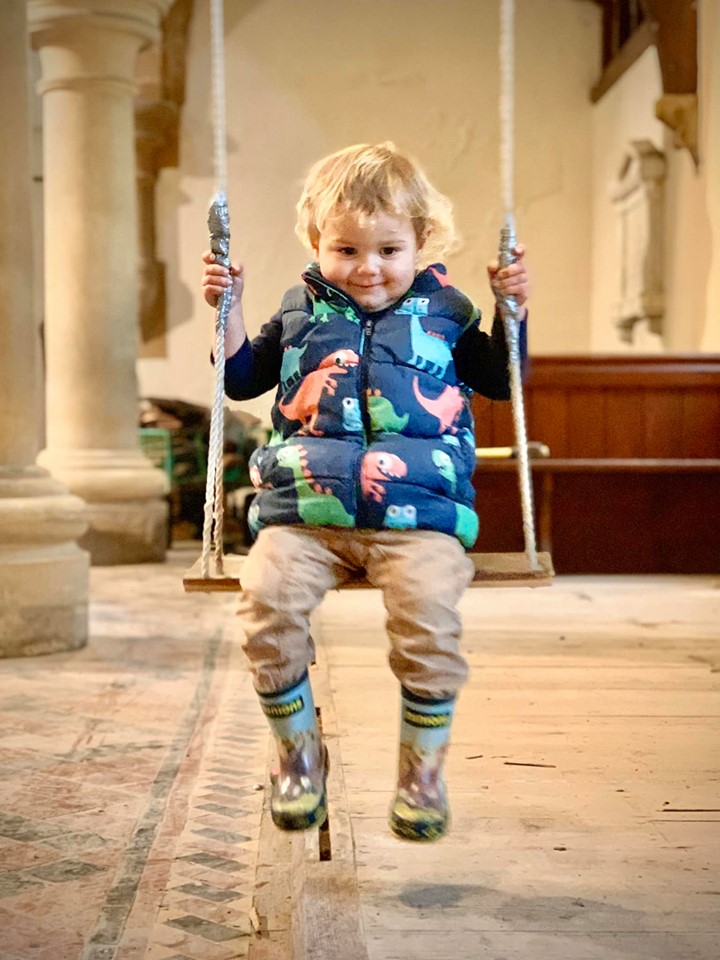 Hopefully, as time goes by the repurposed pews will help breath new life back into Holly House.

Here is a peek at our first celebration within our pew free space as we had a special Holly House picnic. 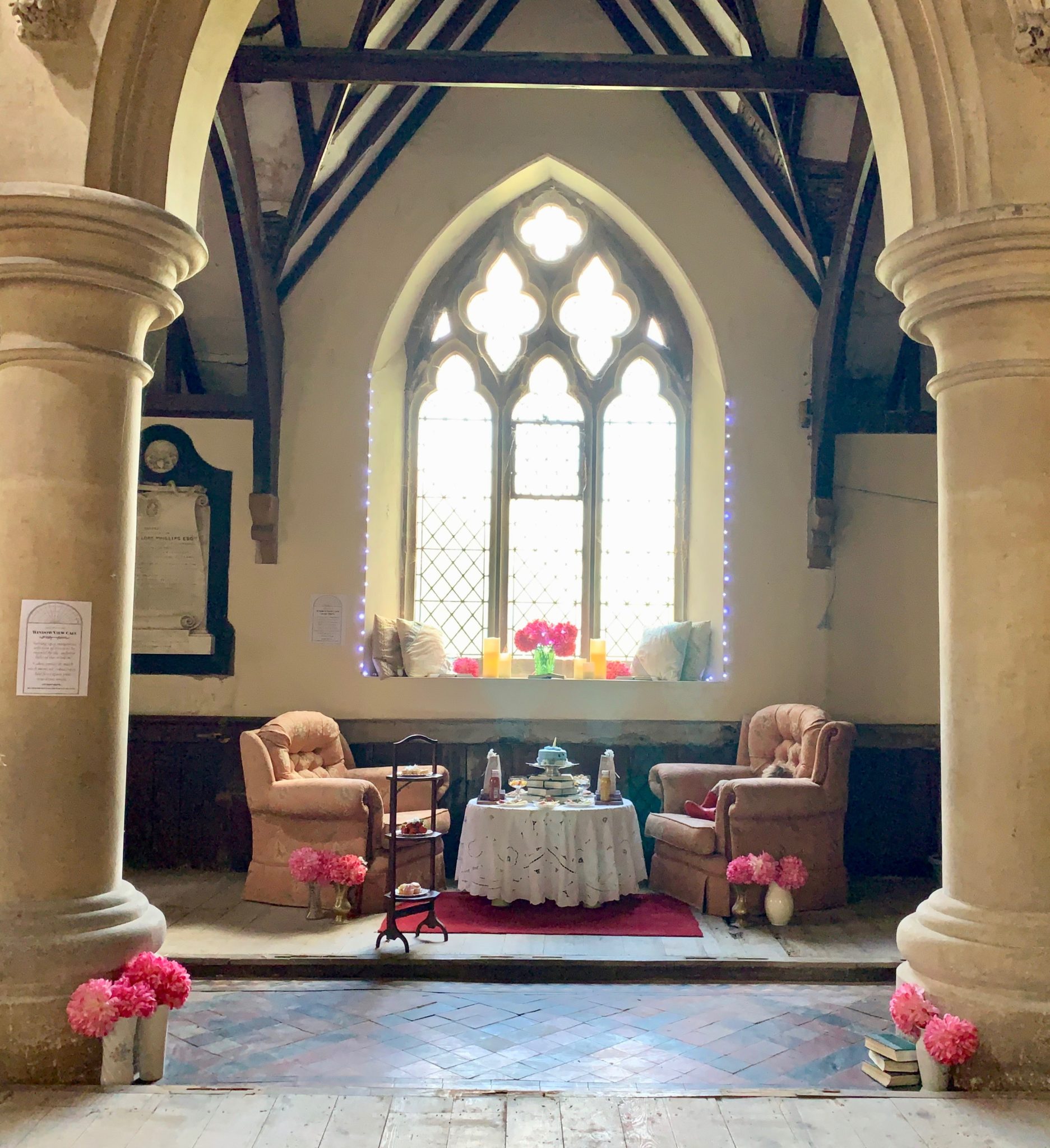