You are here: Home / Mummy Musings / Have We Lost Control of Our Kids? 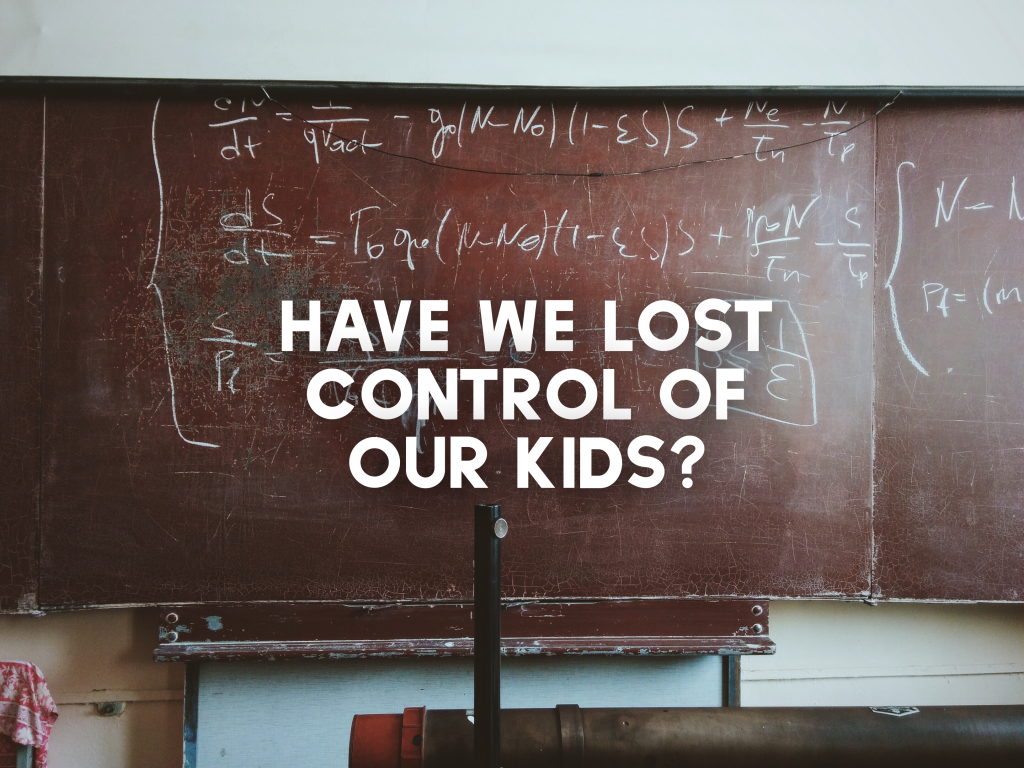 Does anyone else feel like schools/society have gone soft and they hold no control over kids anymore?

Teachers and authority, in general, have evolved and now have their hands firmly tied. And kids know this. They play on this.

Kids are clever, they’re shrewd, switched on, and they know exactly how to play the system.

I’m all for reward over discipline to try and manage kids but I don’t think it’s working. It’s not a blanket option that works for all children.

The modern day ‘namby pamby’ approach to bringing our children up within society is failing them and turning the children of today into a breed of self-entitled individuals. They’re overstepping boundaries, failing to tow lines and they most often know that their actions hold no consequence.

They know they can get away with things.

Saying “Stop it” seems to be the most hardened approach some schools possess and it’s allowing kids to run a mock with a firm knowledge that they can.

Whatever happened to being afraid of getting into trouble? Putting the ball in the kid’s court is what happened.

It’s all very well and good if you have a child that happily tows the line but when you have one that won’t then it’s becoming increasingly difficult for parents to discipline actions if the schools and society, in general, have no powers.

More and more kids seem to be following their peers as a choice over listening and abiding by rules within a school system where they know they hold the upper hand.

If the schools are showing our children that they have free reign to do as they like without a consequence or at least no hardened consequence, then how as parents are we supposed to support them?

Kids know the world has become soft and are completely aware that they can get away with things just because they are children. And that’s going to be to their own future’s detriment.

And it’s not just within the school environment, it’s on the streets too. The police no longer hold any power. They can no longer deliver a child home by the ear. It’s like society has installed that children need a voice and respect as people but what happened when those kids give no respect? Nothing. It’s like the youth of today have been handed the trump card.

Children seem to get more nowadays if they act up and less if they achieve. There’s no sense in that method as the kids are just going to enter their working life either not putting in 100% as they know they only have to do a bare minimum or becoming lacklustre because they’re working hard but getting less recognition than those who don’t pull their weight.

We’ve shed a lot of things from the ’80s and ’90s. We’ve broken down lots of barriers and unbricked walls that have held us back. But we seem to have abandoned a backbone along the way in dealing with kids.

We’re allowing the youth of the day to become a yob culture. The system is failing with us its overly soft approach.

In my opinion, we seem to have lost control and sadly gone past the point of no return.
The system has handed our children a ‘get out of jail free’ card.

It’s great that the world has endeavoured to grasp onto a little more empathy but it seems to have been forced to a point of no return.

We can’t get tough with kids anymore and that seems ludicrous when at the end of the day they’re going to leave the school system and be thrown into a world of toughness.

There’s no fear of, or respect for, authority anymore.

I’m not sure what the answer is but I sure as hell know that as a parent it’s becoming increasingly difficult to discipline my children within a world that’s teaching them a stupid level of self-entitlement that allows them to do exactly as they please.

Parents hold a responsibility for teaching their children right from wrong but society seems to be showing our children that it’s not only acceptable to challenge that but it’s also something they can get away with.

Kids don’t fear adults anymore and, whereas I understand that our children should always feel safe, I think the loss of this fear has thrown our ability to enforce authority into the upbringing of our kids into turmoil.

Is it wrong that our children should have a fear of authority that helps them tow the line? I don’t think it is.

I think that loss of fear has come at a detriment. Some children need that firmness to help guide them.

I wish that society would grow back a set of balls because with the evolution of the mindset of softness within our society I feel we’re losing and it’s only going to get worst.

How long will it be until this ‘hand tying’ situation firmly spills over into our ability to parent our children?

I’m sure as hell finding parenting teenagers a whole different ball game to the teenagers I raised 10 years ago and I dread to think what it’s going to be like in another 10 years.

Authoritative figures seem to be losing the game. I don’t envy them.

Yes, authority starts at home but what the hell can you do when that stance on authority is becoming shed when our children are let out into the world beyond their doorsteps?

It just leaves me wondering who exactly calls the shots nowadays. Is it really us? Or is it our children?

Have we given them too much?

Where Do Lost Toys Go?

Should We Reward The Rebellious?

Let Our Kids Be Kids

It’s OK to Argue in Front of Your Kids